Get in on bitbucket

A first class sequencer for Houdini 16.5 and up. It provides you with a very comfortable shot based workflow right in Houdini. Set up your cameras, make an edit and preview or render the tracks with a few clicks. It allow you to be more creative, save a lot of time and avoids mistakes. At hearth it’s a camera sequencer that manages everything related to it’s shots, besides that it can also be used as an very advanced dope sheet to adjust (re)timing on anythings, trigger events, etc.

ProSequencer 2.0 is available for free and is written in Python and well documented.

2) Open the “Python Panel Editor” from the “Windows” menu

3) To verify it’s there select “ProSequencer” from the pulldown button right at the top of the “interfaces” tab. This is also were you can tweak the source if you ever need to.

4) Go to the “Pane Tab Menu”-tab and move the “ProSequencer” from the left into the right side using the arrow buttons.

5) Press “Apply” and you should now be able to open PS pane tab.

Create a simple camera sequencer and learn the basics along the way:

2) create a pighead and few cameras, all with a different view

3) drag the cams into the panel, they should appear as tracks and a ‘/obj/shots’ node is created in the network view.

4) double click on an empty part in the panel and it will take you to the sequencerNode in the network view.

8) Learn how to work with tracks and create an edit

9) when scrubbing, or on playback, the viewport should switch between cams.

12) Read the rest of the this page to get the most out of it.

And while the main use of ProSequencer is to provide a proper shot based workflow, it can also be used for alot of other things. For example to  adjust timings or to trigger events. You can hook up a timewarp and timeshift node to the track’s in- and outpoints or link the inpoint to a ‘create’ frame of a simulation object, use the inpoint and duration to control the birth and lifespan of a particle system, etc.

The Sequencer panel is where you manipulate the tracks. The panel can be seen as a visual aid to manage and setup all of the nodes in the sequencer network. This network works autonomously and does not require the sequence panel to be present, or even for ProSequencer to be installed. Behind the scenes it’s all automatically setup using native Houdini nodes and simple expressions.

You can Drag&Drop various items onto a ProSequencer panel

To adjust a track’s timing simply drag the in/outpoint handles. You can also grab the middle part of a track to move it whole.

You can assign cameras, ROPs, takes and/or audio files to a track which can then be used to perform various actions and automations.

There are a few keyboard/mouse combinations that trigger different behaviors:

You can also Drag&Drop various item on a track: 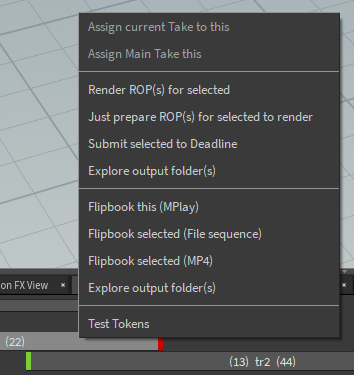 This how sequences look in the network view, they are basically switches with nulls. 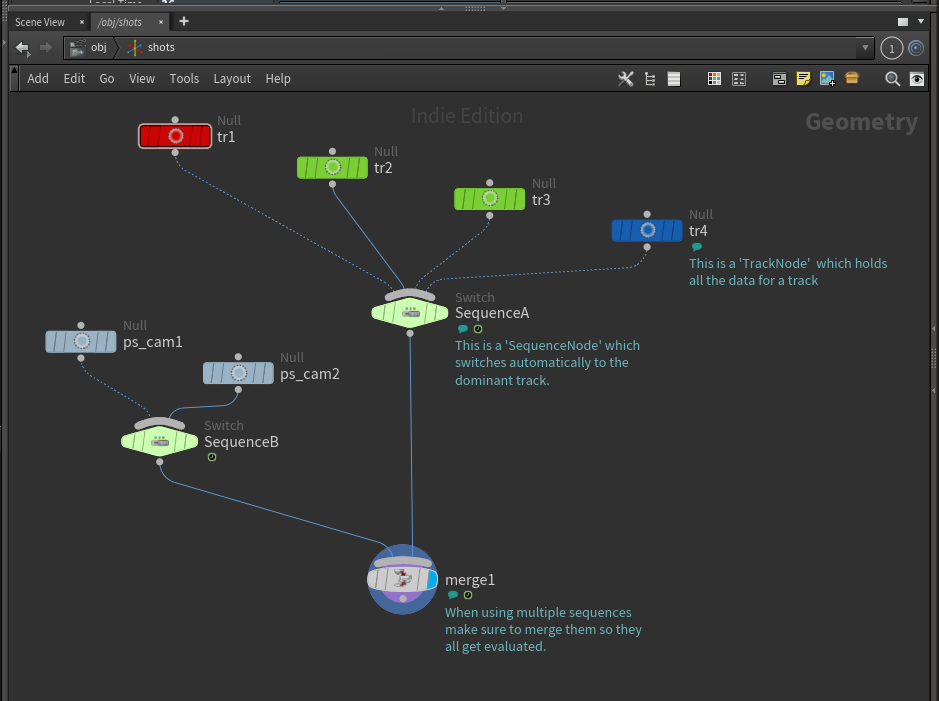 A TrackNode is simply a native null node with added parameters to hold all the track’s data. Once you connect a new null node to an active SequencerNode it will all be setup automatically. So to add a new track to a sequence just create a null node and connect it to the SequencerNode’s input and you should see it change it’s icon and gain extra parameters. It will also show up in the panel as a new track. 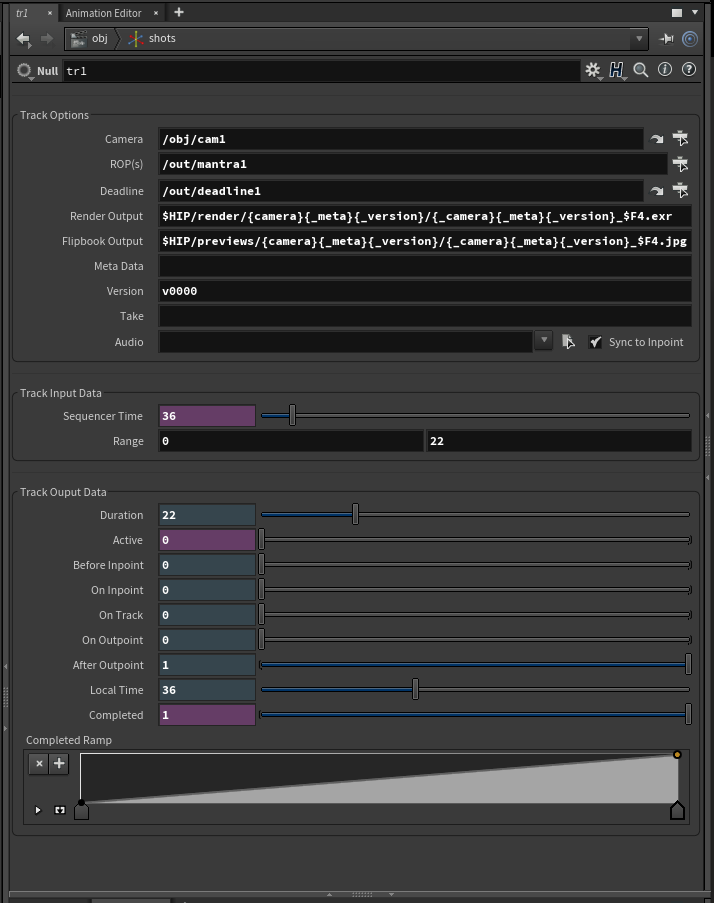 Each of the tokens can be internally prefixed with a single character, for example {_version}, that will only be used if the token value is not empty. This will avoid double separators when tokens are empty. Just make sure you end up with proper paths and filenames.

You can set default values for both paths in the hou.env file. (escape $ signs like this <$>)  For example